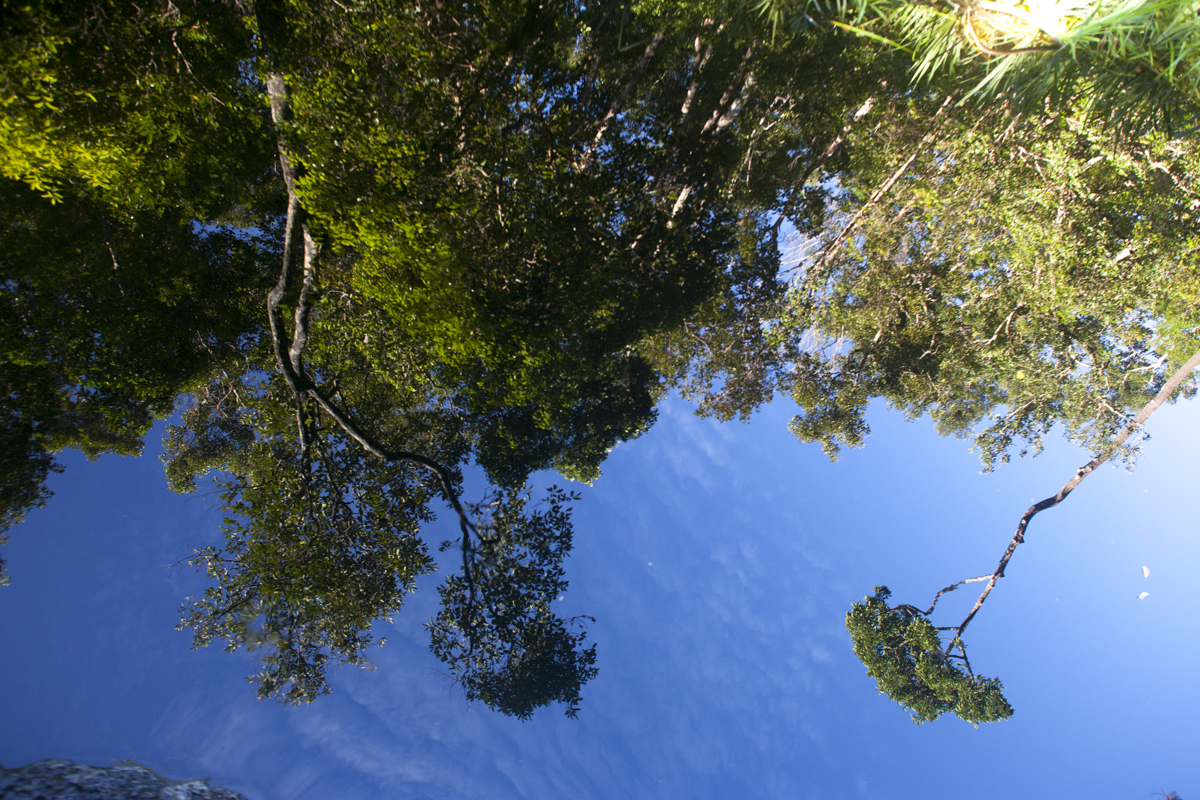 Our flight into Pankalan Bun crossed the southern coast of Borneo, the world’s third largest island. The region, known as southern Kalimantan, conjures romantic visions of old spice traders under the ancient rule of a divine sultan. Today it’s part of Indonesia.

The forest beneath was pan-flat; the ocean milky, except where it was crossed by jet black creeks, trading water between unspoiled tannin-stained wetlands and brackish coastal estuaries.

This is one of the last strongholds of wild Orangutans. It’s not a vast area. You can almost see the National Park boundaries from the air. The northern border is the Seponyer River. Elsewhere, the edges are artificial, put there by surveyors in neat, square blocks and backed directly onto leases for palm oil production.

At lower altitude, Ironwoods become visible, dotted emergent trees that tower over this primaeval landscape. The ground is invisible beneath a canopy so dense, it captures all available light and water, essential elements for the life support beneath.

The palm oil plantations at the edge of the rainforest are fresh, lush and verdant. As we descend into Pankalun Bun, they become thinner, less healthy, exposing a thin red soil beneath.

It’s a first reminder how important the rainforest is to supporting life here.

Forests are a myriad of connections, from planet-wide processes like carbon exchange (an oxygen molecule breathed out here has existed forever) to the arms-race between herbivorous insects and defensive plants, to microscopic cellular chemistry.

In the leaf of a tree, there are systems we aren’t close to understanding. Photosynthesis, where plants use the sun’s energy to create sugar from carbon dioxide and water, creates only oxygen as a waste product. Humans can’t engineer such an elegant, non-polluting system.

As an ecologist, this is how I see the world.

I don’t see a patch of forest as a resource to be removed, turned into something else or put elsewhere. Forests are a driving force where livings are made.

So you’d be forgiven for thinking it’s a vastly nutrient-rich environment.

Beneath a fragile peat layer, only a few metres deep, laid down through leaf-fall over millenia, is an infertile soil. Life on Earth thrives only when nutrients are acutely budgeted. Much in the same way as your life depends, not on having enough money for this week’s shopping but a job and income sufficient, to pay for shopping every week.

Like your weekly income, nutrient budgets are already accounted for; locked into future ecological needs, driven upwards and drawn into the atmosphere by trees and clambering vines, that provide the infrasrtucture where physical, chemical and biological processes happen.

Despite the apparent riches, food here is very hard to come by. Orangutans will climb into the tops of the very largest trees to graze on fruits that come into season only once in a while.  2016’s BBC Wildlife Photographer of the Year, Tim Laman, captured that unique shot in his winning photograph.

Lowland rainforest animals are highly specialised and the ‘niches’ they occupy are so dense and varied, not even birds, escaping the Arctic winter, can settle here. Seasonally, migratory birds fly vast distances across the equator because, while tropical rainforests are so lush, there simply isn’t the scope to compete with the density of local specialists. It’s more energy-efficient to fly an extra few thousand kilometres than try to steal a living from the rainforest.

The richest environments on Earth aren’t fuelled by an over-abundance of nutrients but the opposite. Everything available is instantly subsumed into the multitude of activities that connect with a gazillion points at every scale imagineable.

That’s what is so marvellous about rainforests. You’re staring at a system that is humanely incomprehensible.

When rainforest is slashed and burnt to make way for agriculture, the nutrients that were budgeted for the near future, are released once only. New palm oil plantations on the edges of rainforest are profitable only for as long as the nutrients ‘stolen’ from the ecosystem can last.

Industrial palm oil plantations have a relatively short life expectancy. After a few decades, or a couple of crop-rotations, even despite addition of fertiliser, the soil becomes degraded. Already, Malaysia is reporting a decline in yield attributed to this and other factors. Ultimately, with plantations and rainforest gone, there becomes a limit to the environment’s ability to yield to other land uses. To allow the system to correct itself can take thousands of years.

This is the real motivation that conservationists have to protect habitats, not for their own sake but because they are essential.

That’s not to say palm oil can’t be produced sustainably - in fact, sustainable plantations, need to support both a forest economy and a local economy, in order to last. It makes no sense any other way.

So saving Orangutans is about creating conditions where rainforest can continue to build a budget for our welfare long into the future. If we’re to be part of that process, palm oil plantations or any other form of agriculture, need to be integrated with the rainforest, so the unimagineable becomes fathomable and we look after the livelihoods of people and nature together for many years to come.

If you want to find out which products use sustainable palm oil and discover more about the vast array of products on the market that use palm oil, download the App here: