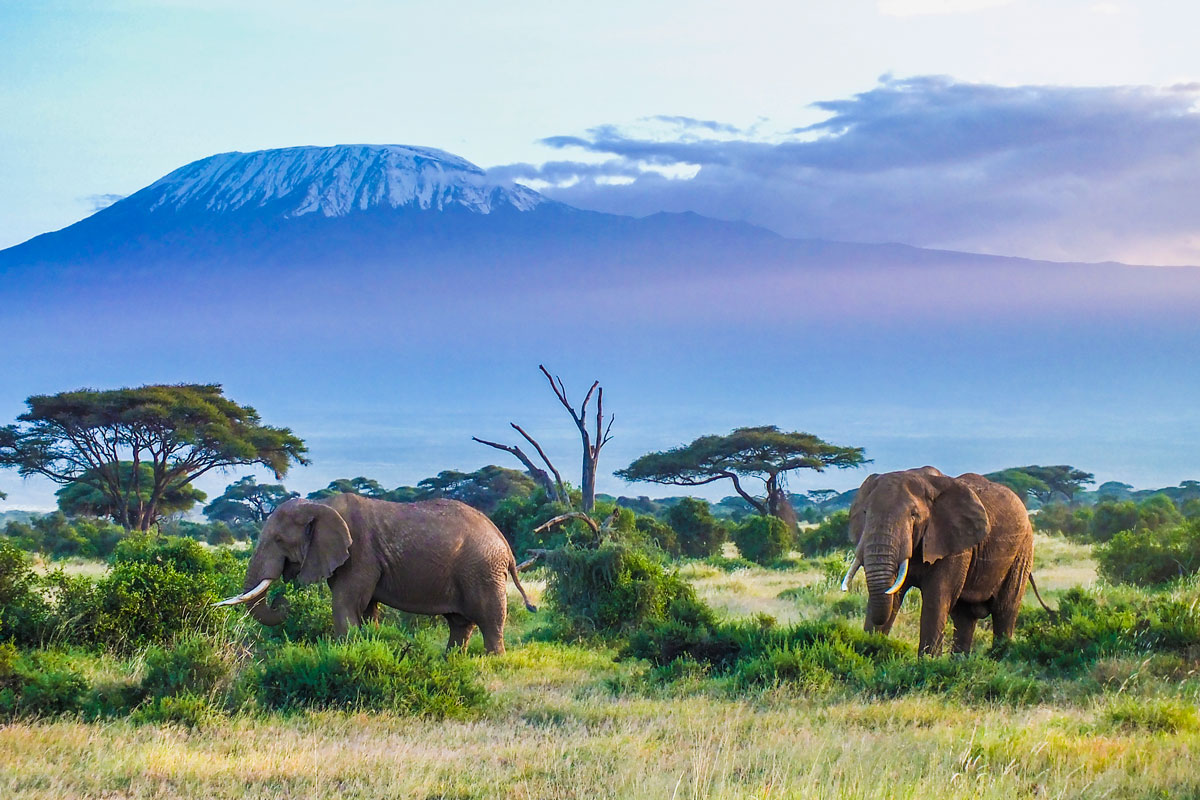 Losing her heart on the savannah, Susan Bredow marvels at all East Africa has to offer.

It’s taking some time to find a suitable picnic spot for lunch. Three lionesses lying low through the midday heat are in the first chosen place beside a small pond.

We let them be and drive on until our guide stops in the shade of a balanite tree. He’s looking up for some time before he unpacks.

“I set up one day with the table laid and everything ready when a guest noticed a leopard right at the top of the tree,” he says. We look up. No leopards here today. We do see leopards though during our safari through five parks in Tanzania and Kenya, all of them in trees.

For the first time I am seeing African wild animals in their natural habitat and it is hard not to feel moved by the giraffes, elephants and zebra and myriad other species against the backdrop of their true landscape.

While pointing my camera at a group of impala, delicate antelope with pretty offspring, I tell our guide he has a great place to call his office.

Sammy Mshana agrees. “If I don’t come here for a few days, something is missing in my heart.” At this point, I’ve been in the bush less than one day and already I feel I have found something that has been missing from  me. It reminds me of the first time I scuba dived. I am connecting with an amazing new world.

Within those first couple of days with Sammy in Tanzania’s Tarangire National Park, we have ticked off numerous animals and birds including four of the so-called big five. Lion, leopard, buffalo and elephant are in the can. To see a rhinoceros, which is not found at Tarangire, we will have to wait until day four. Nine days later, I’m seriously reconsidering if I will ever visit another zoo.A lifetime of browsing National Geographic magazines and watching wildlife documentaries has not prepared me for how the savanna of Tanzania and Kenya will grasp my heart too.

The places I have been have some of the best animal viewing in Africa:

Animals flock to Tarangire, a short hop in a light plane from Tanzania’s Mt Kilimanjaro International Airport, to be sure of water during the dry season. From the air you can see the marshes, bright green swathes of colour where elephants, hippopotamus, wildebeest, buffalo, many types of gazelle and zebra collect to bathe and graze. Due to excellent anti-poaching programmes, the park is known for its large population of elephants. And with more than 550 bird species, it’s heaven for twitchers.

Although Tarangire is 2,850 square kilometres, it is by no means large. It is only the sixth biggest park in Tanzania and five times smaller than neighbouring Serengeti.

Sanctuary Swala is less than an hour’s drive from the gravel airstrip at Kuro where we land but it takes much longer to get to the quiet southern end of the park because there is so much to see on the way. 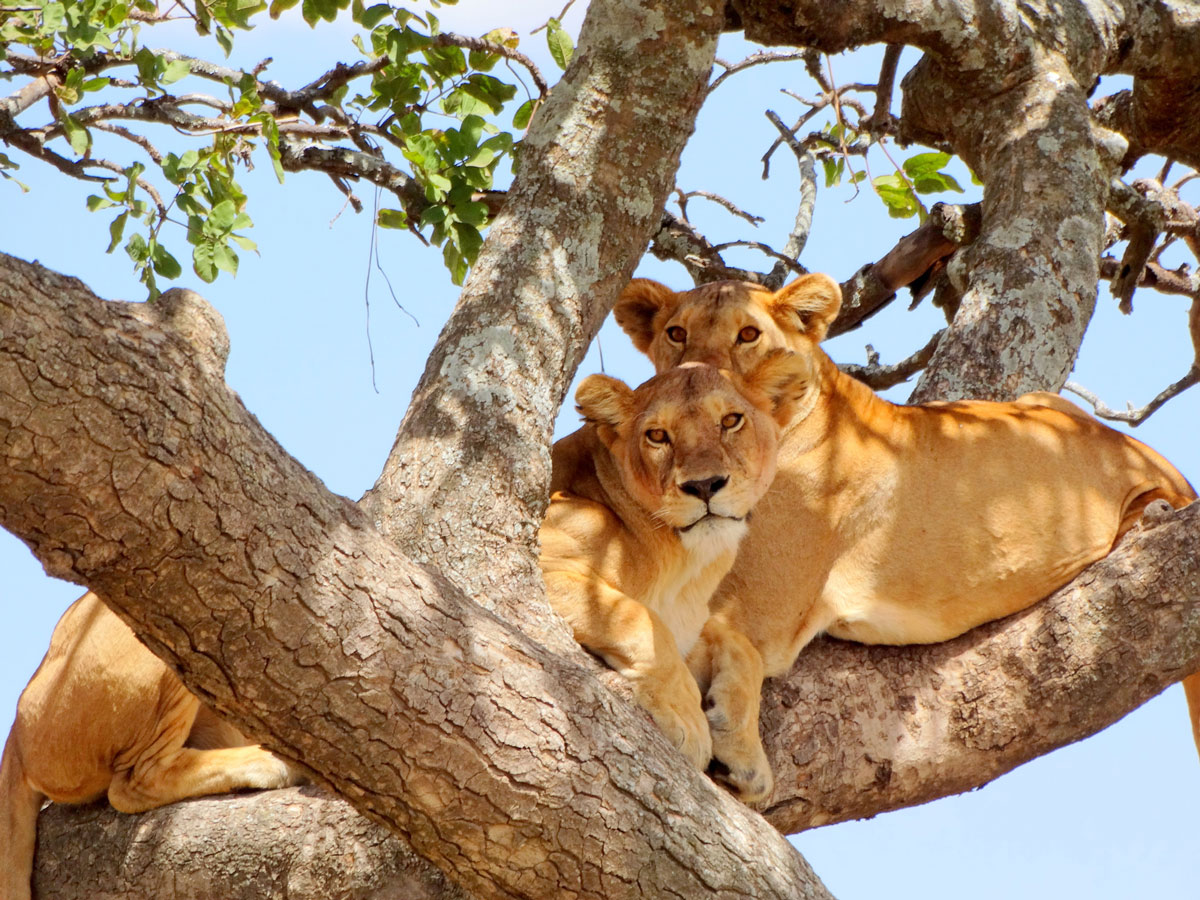 We come across the fresh carcass of a buffalo, with a large pride of lions sleeping it off under a nearby baobab tree while scavengers finish off their kill. There is a rare greater kudu sighting. There are less than 50 of this shy antelope with elegant fine white bands in the park and they are super shy.

It’s antelope heaven here though with plenty of eland, the largest of the species, along with waterbuck. which looks like it has a toilet seat around its back end, impala and hartebeest, with their big muscular shoulders.

This park runs along a fertile strip beside Lake Manyara taking in a large part of the shallow lake where fishing is banned and catfish and Nile perch thrive. Located in the Great Rift Valley, Manyara opened in 1960 and is one of the oldest parks in Tanzania. Although we don’t see them, this place is known for its climbing lions. They’re no different to any other lion except that they like to climb trees.

Lake Manyara is more densely forested than the other parks in the area, with amazing examples of the baobab tree, as well as chinchona, from which quinine is taken, mahogany and umbrella acacia. 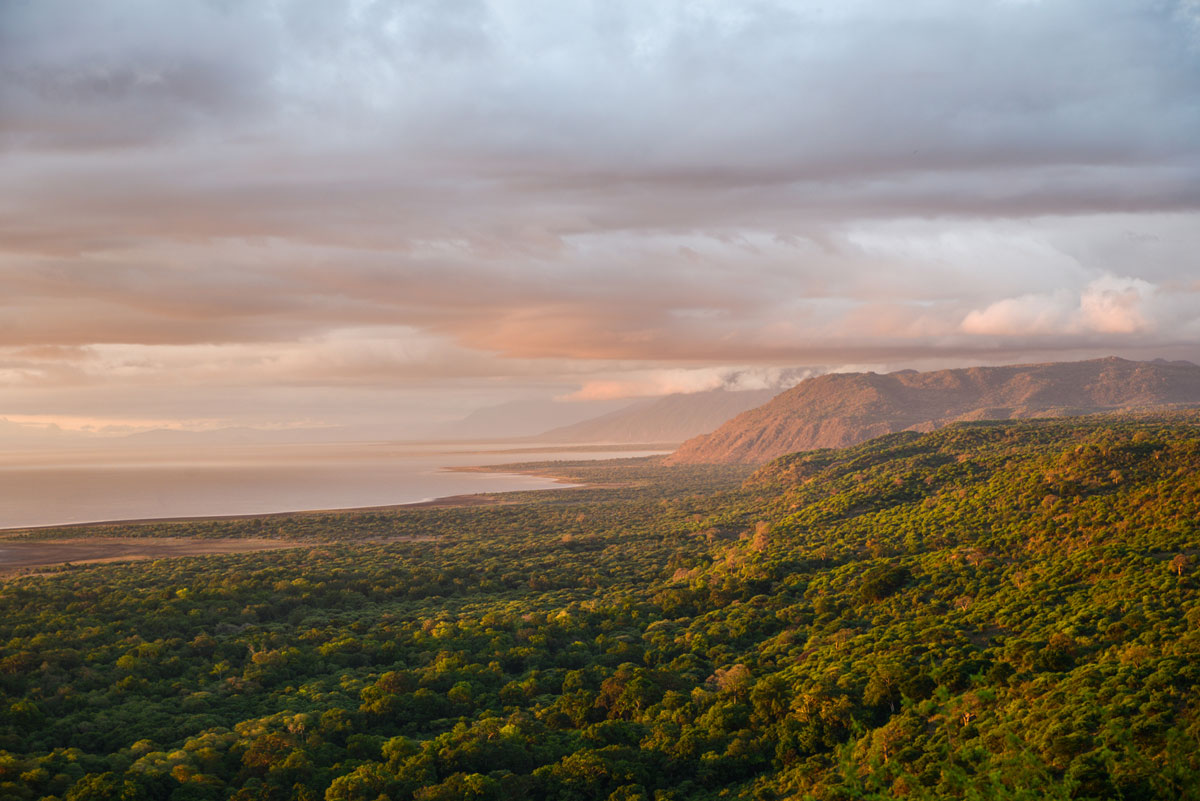 Birds are everywhere in the park including pink flamingo, pelicans, egrets and yellow billed and marabou storks. There are lots of hornbills too.

Noticeably absent is the tsetse fly which gives visitors a welcome break from constant swatting.

Lush and green all year round, this park is a stunning place to see birds and semi-aquatic animals.

I can’t get the cowboy song “Home on the Range” out of my head but it’s what the big open grassy plains of Ngorongoro bring to mind. There are buffalo and antelope by the thousands roaming under wide-open skies. They’re alongside herds of zebra and wildebeest and gazelle.

Ngorongoro was once a volcano larger than Kilimanjaro which collapsed to form a perfect crater. It is the only crater in the world with its walls intact which makes it a perfect corral for wildlife.

On the valley floor we learn about the three types of jackal that live here, see our first very entertaining ostrich mating dance and are introduced to the crowned crane. This national bird of Uganda is very common at Ngorongoro.

We also spot two rhinos cruising so can tick off our Big Five. There are about 20 in this reserve and our guide Emmanuel tells us he has seen 16 in a single day.

Serengeti is Tanzania’s oldest wildlife reserve and since it opened in 1951 has been one of the best-known conservation areas in the world. It is the home of the largest animal migration on the planet, the annual movement of more than 1.6 million wildebeest across 800 kilometres to follow the rain and a plentiful supply of fresh grass. Large numbers of zebra and Thomson’s gazelle move with them. 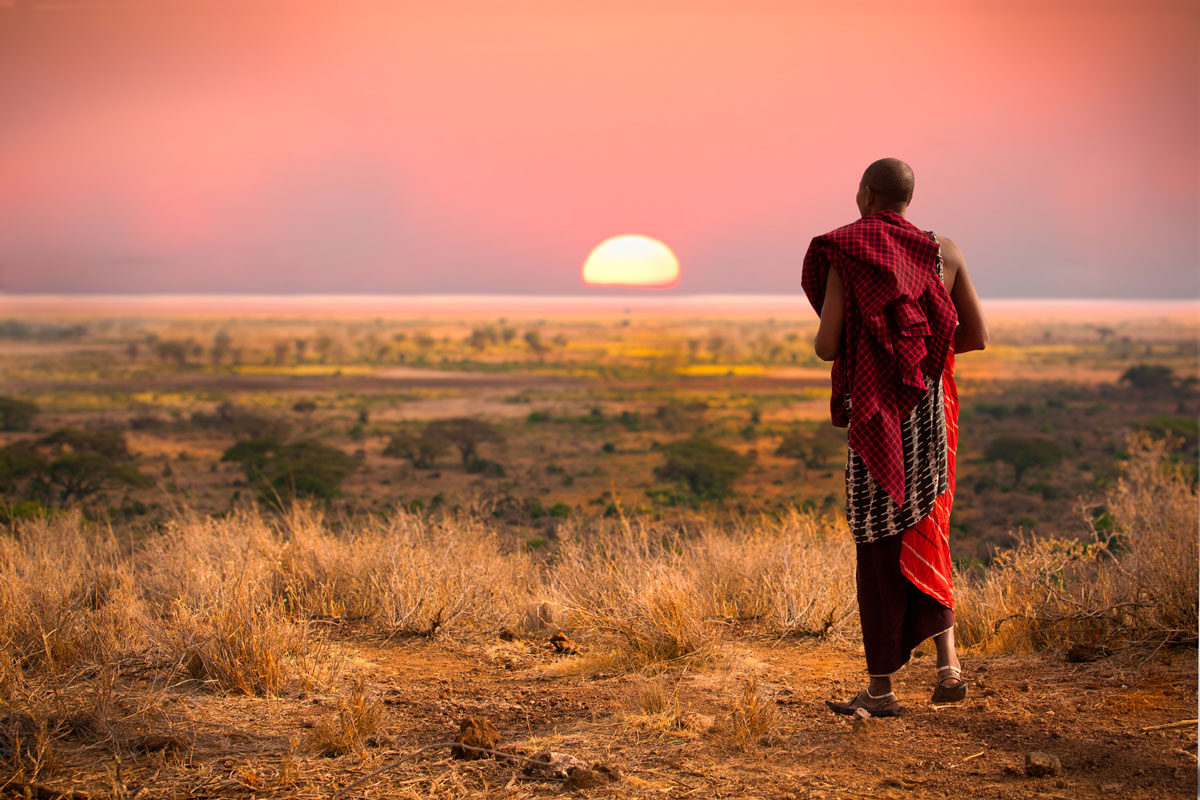 About 70 large mammal species live in the Serengeti and more than 500 types of bird. It is one of the best places to see large numbers of lions and in just a couple of days we are lucky enough to spend an afternoon watching an extended family lounging on the grassy banks of a river as well as seeing several other lion prides.

During the migration, as far as the eye can see, the funny looking wildebeest march in single file across the landscape and rivers. We watch a large group on the bank of the Mara River. In the water are a number of crocodiles lined up and waiting.

Each year at least 10,000 wildebeest lose their lives while moving on the Serengeti. Carcasses dot the landscape.

It rained two days before we arrive and it’s enough to make the countryside green. The grass is up and trees that appeared dead are madly sprouting. The landscape is rolling and lush like prime farmland.

We drive through the giant golden granite boulders known as Olakala Rocks looking for leopard but have to make do with the brightly-coloured male rock agama lizard, who stands up waving his fists in the face of a threat, and finding rock hyrax, which resemble a large but more attractive rat. Under a desert date, we find two young male cheetahs with bellies so full at first I think they are pregnant females.

Our accommodation at Sanctuary Migration Camp at Lamai is deep in the bush so animals and birds wander past as we eat breakfast. It is amusing to hear visitors talk about too much nightlife, that is the animals making noises. I learn to recognise the nocturnal sounds of zebra and hyena.

This is the Kenyan end of the Serengeti and there are plenty of leopard, cheetah and lion here as well as at least 50 rhinoceros. Within half an hour of driving into the Masai Mara, we are lucky enough to find five of them. We get up close enough to take photos before they decide it’s time for a siesta and plonk down in the long grass and out of sight.

Poaching for their horns, that are used as an aphrodisiac in Asia, is a problem. The rhinos we see have had their horns trimmed to discourage poachers.

The Masai giraffe is distinctive with its white socks.

We watch as three lions stalk a herd of hundreds of buffalo heading to a salt lick. The lions hang back waiting for easy prey, the youngest and weakest at the back of the group. 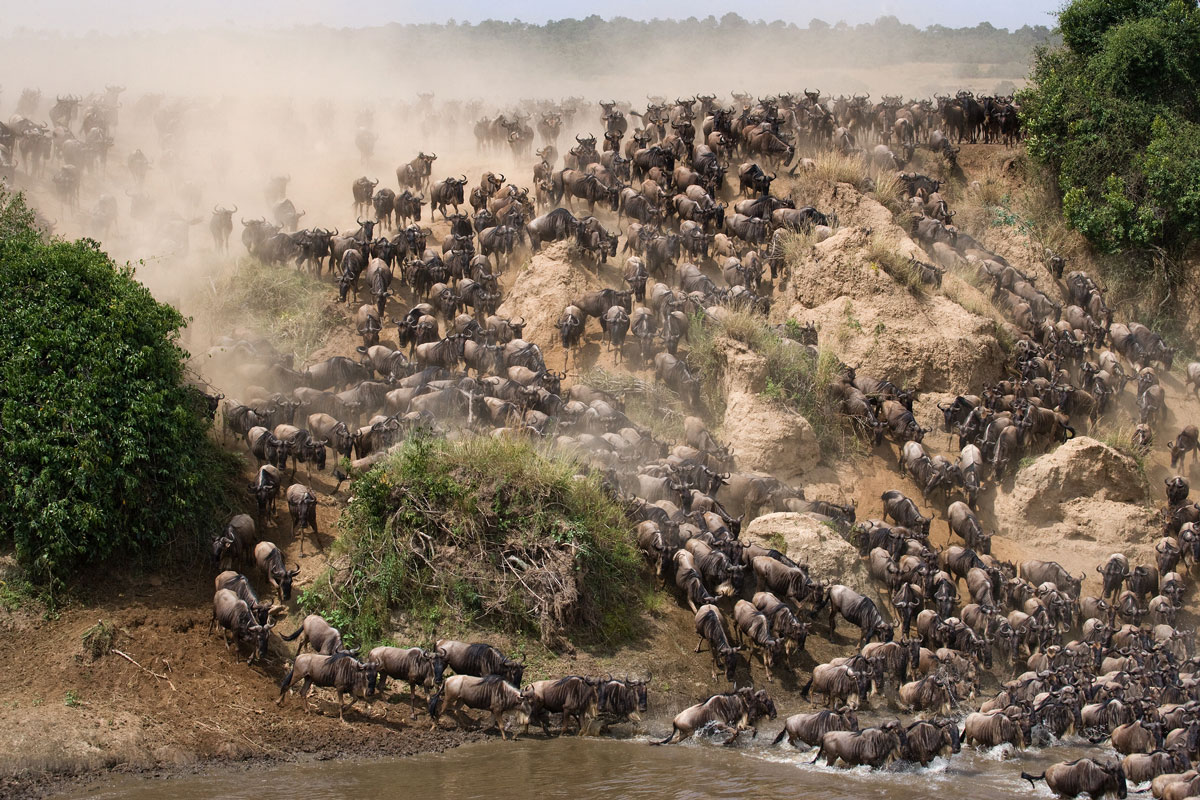 The Mara is stuffed with antelope we haven’t seen elsewhere. There’s waterbuck, Bohor reedbuck and Coke’s hartebeest along with the ‘blue jeans’ topi, so named for the colour of its legs.

We count 14 crocodiles waiting for a group of Thomson’s gazelle to cross a river. The first gazelle is taken. The others flee back to the shore.

A young Australian makes a video and posts it to social media titled ‘Who Killed Bambi.’

I feel as though my heart is full as I end my 11 day adventure in the Masai Mara. No place has affected me in quite the same way as the people, the animals and the countryside of East Africa. 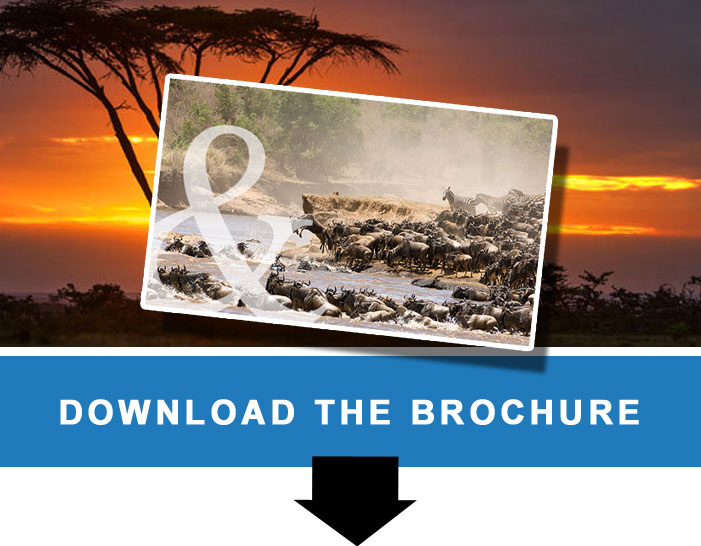 For assistance from one of our experienced travel consultants: